18 years-old and cleared for take-off

It’s one thing to dream of piloting a passenger jet from New Zealand to Paris. It’s another thing to commit to a plan and start to make it happen. You can do it, as 18 year-old Ellie McIlraith is proving.

In her last year at school, Ellie had done a quick trial flight before she started the ServiceIQ Gateway Aviation programme at Timaru’s Southern Canterbury Aero Club.

“Just five minutes in a tiny two-seater Tomahawk was enough to know I was pretty sold on the idea,” says Ellie. “I love the A380 jets because they’re so immense, powerful and seem to defy physics. It would be great to wake up and go to work to fly a huge machine.”

She completed the programme with flying colours, winning the 2015 ServiceIQ Gateway Flying NZ Flight Training Scholarship and $2000 towards her goal. Currently, she’s at Southern Wings flight training school in Invercargill studying to become a commercial pilot.

“I want to end up flying for Air New Zealand on the long haul international routes. It will take about 10 years to get there which is a bit daunting but it’s definitely achievable. I’m 18 years-old now and my goal is to be flying for an airline by the time I’m 25 or 26,” says Ellie.

“At the moment, we’re mainly on the ground studying the subjects to gain a Private Pilot’s Licence (PPL). It’s good because it means that once I get into the aeroplane, I’ll know all the do’s and don’ts. Once I’ve done the theory, I’ll go on to the practical flying and eventually sit a PPL Flying test to gain my license. I find the biggest challenge in the air is lining up and landing. It’s pretty hard. It’s like driving a car when you have to make sure you’re doing everything you should in order to have control.”

The fledgling pilot says her inexperience is a bit scary, “but you do have an instructor in the plane who is there to save the day if things go awry”. 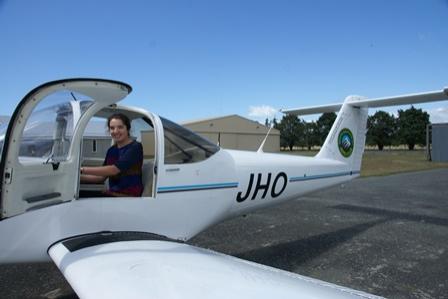 Once she finishes at Southern Wings, Ellie will be qualified to work for an airline in a multi-crew environment. But to get the job she’ll need more flying hours and experience.

“I’ll get a job in general aviation, flying for scenic or a skydiving company and eventually I’ll have what I need to advance up into the airlines as a First Officer (aka Co-pilot). Then I’ll need to do that for a while, getting to know the aeroplane and the systems before I can be promoted to captain,” says Ellie.

Kick-starting her career with ServiceIQ’s Gateway Aviation Programme gave Ellie the vital basics for take-off, including effects of controls, straight and level flying, and climbing and descending. It also gave her a realistic idea of how to become a commercial pilot, the type of knowledge she needs to learn, the hard work she has to put in, and the money it’s going to take.

“I’ll come out with quite a large student loan but as long as I put in the effort, it’s definitely going to be worth it once I get to work for an airline.”

Ellie is saving her scholarship dollars for flying time in the holidays, back home in Timaru.

“So far, I’ve taken a friend and my younger brother up. We flew around the area, went over our house and did a few steep turns. The scholarship money also means I will be able to take Mum and Dad, and my 89-year-old Grandad for a fly, who used to have his PPL license himself. That will be very cool,” says Ellie.

Gateway to the sky

ServiceIQ’s Aviation Gateway Programme is a fantastic way for students who are interested in aviation to get a feel for what it’s like to be a pilot and to gain an understanding of different areas of the industry.

If the passion is to be a pilot, this first-time experience can help a student gain acceptance into full time flight training.

Students do their training with CAA qualified instructors at a local aero club during term time. The programme usually takes about 10 weeks, and normally runs between 1.00pm and 3.30pm.

ServiceIQ’s Sector Advisor – Aviation, Allan Moulai, says for those students with the motivation and ability, Gateway also offers the opportunity to gain real on-the-job experience and/or knowledge from aviation workplaces.

“Workplaces may include local aero clubs, airlines, airline agents, air charter services, aircraft sales and maintenance, air traffic control and air freight companies to name a few. Aero Clubs generally construct a programme to suit their location and advertise this to schools who then select the right students to participate in the Gateway programme.

ServiceIQ has various Aviation Gateway programmes for potential pilot applicants around the country, and some for aeronautical engineering in Christchurch and Auckland. We strongly encourage those people who want to know more to contact us,” says Allan.

Find out more about ServiceIQ's Aviation Gateway Flying Programme here. Please talk to one of our expert ServiceIQ training advisors for no obligation advice on programmes to fit your needs.