All that army training that taught him to remain calm under pressure must have helped up-coming chef Nicholas Todd to emerge victorious as the winner of the prestigious ServiceIQ Champion Apprentice Chef 2017 competition, held at the NZ Hospitality Championships in Auckland last Sunday.

The battle didn’t go according to plan for the young Apprentice Chef and member of the New Zealand Defence Force from Burnham Camp in Christchurch.

When he arrived at the competition kitchen in Auckland and unpacked the ingredients from his kit bag, he discovered that he’d left his prize venison back in the fridge at base.

With his secret weapon jettisoned, Nicholas’s dish could have turned out to be a ration pack of hard tack. But luckily, the Auckland Food Show was in full swing next door and he could switch out his menu with a fresh lamb rump as a replacement at the last minute. No pressure.

After a ninety-minute cook-off against seven other apprentice chefs, he plated his triumphant main dish. Nicholas describes the creation as “lamb forest”.

The glory of winning the title is also the glamorous prize. Next year, the young soldier will travel to Australia to spend a week at the world-famous Melbourne Food & Wine Festival, worth around $3,000. He’ll also become a member of the NZ Chefs’ Association. It’s the perfect entrée to a successful career.

Another battle he’s setting his sights on is representing New Zealand against the best apprentice chefs on the planet at the WorldSkills competition in Abu Dhabi during October this year.

Interestingly, he is following in the footsteps of the world’s most famous chef, Auguste Escoffier, also known as the ‘King of Chefs’ or ‘Chef of Kings’, who served in the French army as Chef de Cuisine during the Franco Prussian war.

They say that an army marches on its stomach, so choosing to become a chef for the force is probably a very good career move with very appreciative diners. Maybe Nicholas will treat his Burnham customers to a recreation of his winning dish.

As a child, Nicholas loved watching cooking shows on television and this is where his passion began.

His first job in hospitality was as a waiter. This took him into the kitchen first as a dish hand and then a kitchen hand, at his local tavern.

One of the most exciting things about being an apprentice chef is learning different cooking methods and new ways to create dishes that he’d never imagined were possible.

One early skill was learning how to make hollandaise sauce and it continues to serve him well.

An absolute favourite ingredient is fresh basil. For this chef, the fragrant herb can be used in all kinds of dishes and always brings a beautiful flavour to the table.

Nicholas’s greatest ambition as a chef is to one day own his own restaurant.

“He’s a great example of an apprentice chef who has honed his craft on the job. He has undoubtedly got an outstanding career ahead of him and I salute his achievement,” says Dean. 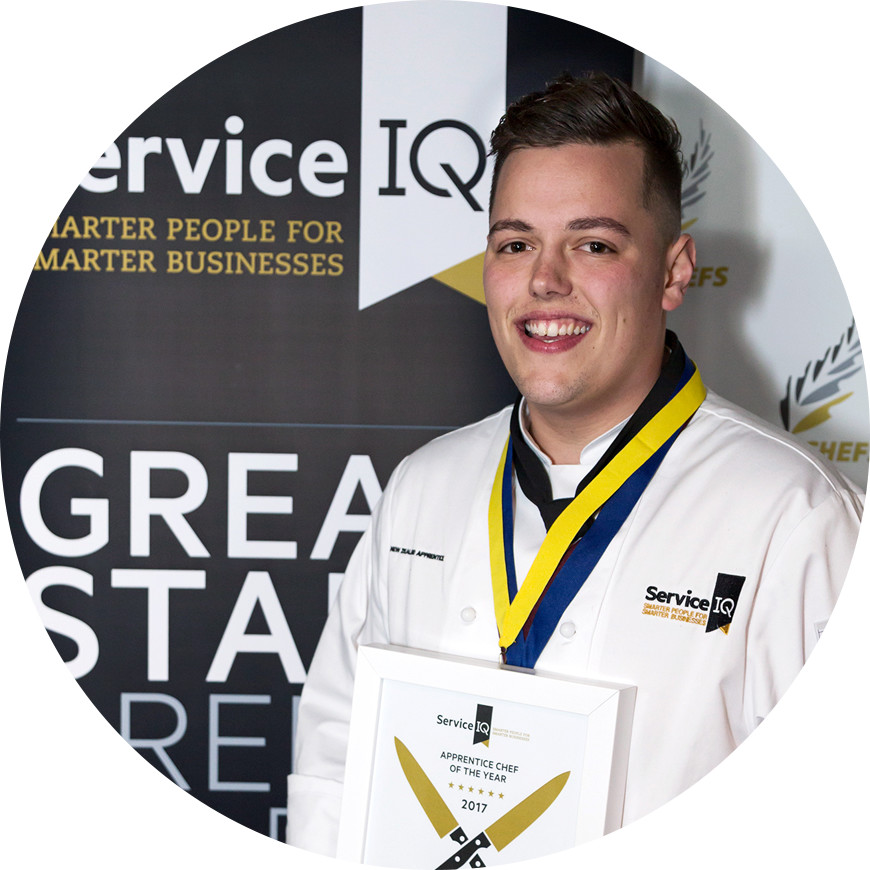 Each competitor for the glittering award is carving out a chef’s career by training on-job at a great restaurant using ServiceIQ’s New Zealand Cookery Apprenticeship programme.

Dean Minchington, says the award recognises the outstanding achievement of aspiring chefs “who learn and earn in a real, commercial kitchen with all the demands and pressures for high standards that that fast-paced environment brings”.

He adds that apprenticeships are a ready-made recipe for New Zealand’s chef shortage.

“More and more young people are gaining the vital skills on-job with an apprenticeship and this can help alleviate New Zealand’s shortage of professional chefs by growing the talent pool,” says Dean.

“The best way to get an education, experience and earn at the same time is with an apprenticeship,” says Dean. “New Zealand’s urgent need for professional chefs with the experience to serve a booming industry that shows no signs of slowing, calls for more people with proven skills and experience. Today’s great apprentice chefs will be the success of tomorrow’s hospitality industry.”