“Make-up is the last thing to enhance your beauty, but it's very important because it builds up your self-confidence and gives you more courage,” said Evelyn Lauder, who in 1962 named the world’s first allergy tested, dermatologist-driven cosmetic brand, ‘Clinique’, and as Training Director, was the first to wear the brand’s defining white lab coat. 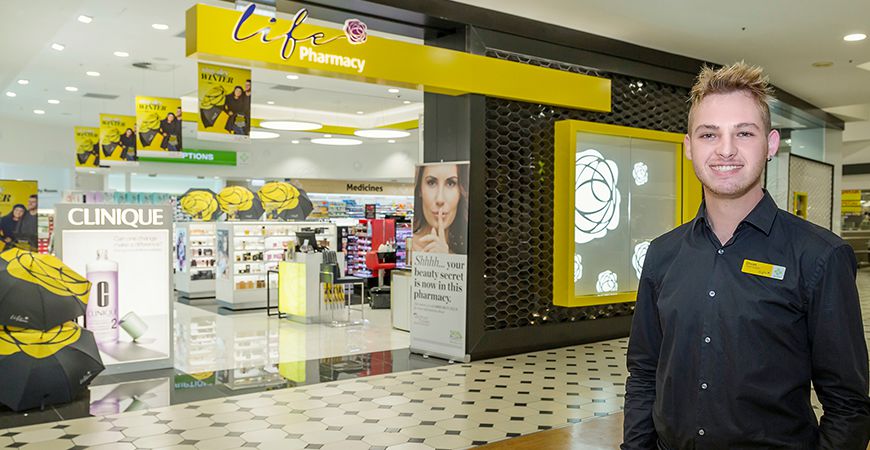 Over half a century later, Divan Badenhorst, the young Clinique counter manager and cosmetic team leader at Life Pharmacy in Newmarket, Auckland, dons his famous white coat with pride.

The Clinique potions appeared to transform his problem skin, he won the overall excellence award at the Life Pharmacy 277 Awards 2015, and he’s advancing his glowing career with Green Cross Health and ServiceIQ retail skills, knowledge and a national qualification.

Selling hope in a bottle has also made Divan the ten-thousand-dollar man: at just 24 years-old, he holds the record for the largest value sale of Clinique products – on three occasions he has sold over $3,000 worth of cosmetics to his clients.

“If you love something, it’s so much easier to promote it to others,” says Divan. “It’s what helps to give your clients real confidence.”

Divan got into retail working part-time at Farmers department store while he was still at school. He started out in menswear, moved into visual merchandising, followed by fragrance and then cosmetics.

Leaving school, he leapt at the chance to be a full-time Clinique skincare consultant at Smith & Caughey, where he was subsequently promoted to counter manager.

Four years ago he joined the Green Cross Health chain and is being groomed for higher management at the upscale Life Pharmacy store in 277 Newmarket.

His ultimate goal is to become Retail Manager, and as part of that plan his employer has encouraged him to train on the job to increase his skills and gain the national qualification, New Zealand Certificate in Retail Level 3.

The Green Cross Health/ServiceIQ programme offers many benefits, including better customer service and sales. It has also helped Divan adjust to the challenge of leading a team who were once his peers. He says he has also significantly increased his product knowledge beyond cosmetics to include the vast array of other merchandise offered by Life Pharmacy.

“I’ve learnt a lot,” says Divan. “I’m very creative and always eager to gain new skills and knowledge that will help prepare me for my next role.”

Divan’s career is flowering along with the flourishing business and climbing sales figures.  Like the courage he gives his devoted skincare customers, he says training has boosted his confidence, too: “I understand people better and love dealing with staff even more. I also love thinking up new ways to grow the business. The training has definitely helped make my job a lot easier and gaining the qualification is a bonus on my CV.”

“I understand people better and love dealing with staff even more. I also love thinking up new ways to grow the business. The training has definitely helped make my job a lot easier and gaining the qualification is a bonus on my CV.”